The idea of a doppelgänger, or identical look-alike, is something I’ve read about, heard about, and thought about—so much so that it sparked the idea for A FACE TO DIE FOR. What could be more fascinating than the existence of another human being who is your “identical stranger” living somewhere else in the world right now? Would you want to meet them? Would a face-to-face encounter really freak you out? And would you want to know more—if the physical resemblance is the only thing you share, or is there more? Mannerisms? Likes and dislikes? Maybe even blood? How eerie and life-altering a discovery would that be?

To say I was off and running with this concept when I began my book would be a gross understatement. All I could imagine were two identical twins, purposefully separated as newborns through horrifying circumstances and then kept apart through all means necessary. 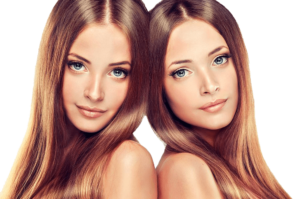 Twins who never knew the other existed—until a chance meeting and an unexpected cell phone photo drives home the reality that a doppelgänger for Gia Russo does indeed exist, and that her name is Danielle Murano. Gia—a wedding planning in New York City. Danielle—a veterinarian in Minneapolis. Identical lookalikes with no reason to believe they’re anything more than twin strangers.

Until further investigation reveals that they are…

The doppelgänger fascination has existed for centuries—in mythology, in literature, in folklore. Currently, there are websites that actually find and unite identical strangers—strangers who often live at opposite ends of the earth. These websites use the information provided to them together with facial recognition software as a tool to accomplish this. This methodology is gaining traction. Even Facebook has its own facial recognition technology that compares features and find similarities that tie a face to a person. Forensic Instincts’ very own Ryan McKay used that software when he was helping the FI team solve a case in my last Forensic Instincts novel, THE MURDER THAT NEVER WAS. In typical Ryan fashion, he forgot to say, “May I?”

As facial recognition technology becomes more widespread in our society, I wonder whether identical twins could unlock each other’s Apple iPhone X? Could doppelgängers do the same? The possibilities are endless, and the overactive portion of my brain that keeps asking “What if…?” is now working overtime as it ponders what might be.

But, despite our ability to link a face to a person, and to find and unite identical strangers, there’s no actual science to explain the ultimate results: how doppelgängers exist. I’m not referring to the kind explored in A FACE TO DIE FOR, where identical strangers turn out not to be strangers at all, but actual twins. But the science and statistical probabilities that explain how two unrelated people can be actual lookalikes. That’s the true phenomenon, and one that has yet to be explained.

So what do you think—intriguing or creepy?